Have I really been doing this for 15 weeks? How crazy is that? Crazy, but so good.

I know I ran before, but now I have that extra push to be committed… I’m held more accountable… it’s slightly embarrassing, but I look forward to doing this post every week, even though it means showing off some really bad photos.

I like being able to say, “yeah, I run. I sweat. And I am a whole heck of a lot stronger because of it.”

So, I keep going. And having people tell me that this, in turn, keeps them going…well, that’s just an amazing feeling!

Thursday-3 miles (+/-) on an indoor track. I say plus or minus because I lost track on the last few laps, so I am estimating based on my time.

We went to the city rec center to check out their track, it’s kind of cool because it’s above the basketball court, so you can watch people shooting hoops while you run. It was nice to not have to bundle/layer up but I forgot how much I don’t like running inside…first, 11 laps is equal to a mile. Can you see why I lost count doing 3 miles?

Anyway, overall it wasn’t a bad run…I forgot a hair tie and it was hot… but I can’t complain…at least I got a run in!

Friday, Saturday and Sunday consisted of a double shift, helping out a friend, running errands and more work…I didn’t manage my time very well, so no run. I did do a little bit of walking with the hubby, so not a total fail.

Monday Afternoon-2 mile walk. Holy beautiful day! It was 60 degrees and the sun was shining. I had to take advantage of soaking up some November sunshine, so I scarfed my lunch at my desk and then drove into town for a quick walk. Two miles in thirty minutes, I went back to work feeling like a million bucks. 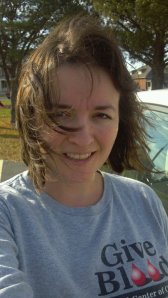 Monday Night-3 mile night run. The hubby and I headed to one of our usual spots to run after work because it’s pretty well lit. Overall it was a pretty good run, we averaged 9:40 pace. 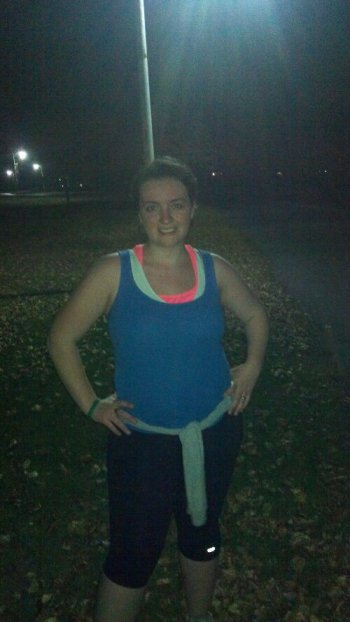 Such a gorgeous night!

I especially loved this run because we saw a big group of people running around the oval, working together and cheering each other on. You know that I love seeing stuff like this!  I was waving and smiling like a crazy person as we passed them.

Wednesday Morning-misadventure. I woke up late and then wound up running around trying to get a horse back to its house…long story, you can read about it here. 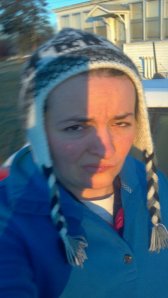 Well… at least I tried.

Wednesday Evening-Treadmill Workout. I headed to the gym to try a spin class, only to find that it had been moved to Thursdays. Because I was already there, I decided to jump on the treadmill for a bit. 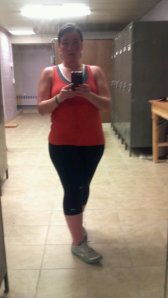 This was really hard. It was one of those workouts where you end up completely soaked, gasping for air and feeling every muscle burn. I had to take a moment between the third and fourth mile and even then, I talked myself through it. When I got off the treadmill, I was beat. This morning, I am pretty sore…but it felt good.

Overall: This week wasn’t bad. I didn’t get in as much mileage as I would have liked but I did get in some quality workouts. I’m hoping I can get in that spin class tonight, but if I don’t, I’m thinking an easy run to work out some lactic acid.

Goals for next week: I’d like to get in some distance and maybe some cross-training.

A Horse of Course!

Sometimes, weird things happen to me. I can’t explain it, but they just…happen.

If you remember a few posts back, I had a little run-in with some flying food while on a run.

This morning’s attempt proved to be just as interesting.

I woke up at 4:45 am and immediately groaned, realizing that my alarm was set to go off in fifty-five minutes. I managed to go back to sleep until the familiar ringing began. Then, I thought I hit the snooze, but I didn’t. So I woke up with a start at 6:07 am.

I had missed my chance to get in the four and a half mile run I had planned on… but there was still time to run to the end of my road and back (a little over three miles).

I had this nagging feeling that I should go…

I then proceeded to get up, start to get dressed and then get back in bed…three times. Each time, that nagging feeling got worse and worse until I couldn’t take it any longer. It was as if someone was shouting at me, “GET UP!!!”

So I did. I layered up, grabbed my hat and found some good tunes.

I begrudgingly started down the driveway and turned onto the road.

Just as I was finding my stride, not even three minutes into my run, I noticed something out of the corner of my eye.

Standing in a field in front of me, was a horse.

Now, I realize that this doesn’t seem that strange due to the fact that I live a bit off the beaten path, however, there was no fence around this field, nor are there any barns on this particular patch of road.

“Well, this is interesting,” I thought.

Having grown up on a horse farm, I know the panic that strikes when you realize that your horse has gotten out.

As I stood there deciding what to do next, the horse ran across the road.

I quickly went over, grabbed his halter and led him back across the road to the big field he came from. He then trotted over to the house at the edge of the field, proceeded to scare their little dog and starting poking around their porch windows.

I knocked on the door….nothing. I knocked again… still nothing.

So I shooed the horse away from the house and tried to think.

I called Farmer Ben, who was very confused about the current predicament I was in, but nevertheless, he told me he was getting dressed and would be along shortly.

At that moment, standing in the middle of the field with my new friend, I finally saw where the horse had come from. There was a fence and a barn at the opposite end of the field.

I started to lead the horse in that direction. He got bored and trotted the other way, having only a halter to hold onto, I let him.

Upon reaching the fence, I looked around to see where he had gotten out but didn’t see any breaks.

My friend ran into another person’s backyard and started sniffing around the clothesline.

So I jogged up to the front door and knocked. Twice.

Nothing. Except their dog barking.

At that point, Ben pulled up in the Versa and the horse had trotted over to his fence.

Hopping in the car, I glanced back to see if he had gotten back in. He hadn’t.

I called a neighbor to see if he had the owner’s phone number. Fortunately he answered, unfortunately he didn’t have the number.

So we drove around the corner til we found what we thought was the right driveway. We walked up a small hill to discover that the driveway was in fact, on the other side of the house… oops.

I found the main door to the house and knocked. Nothing. I tried a few more times to no avail.

There was another fence connected to this one so I walked to the next driveway and happened to meet a woman coming out of her house.

When I asked if she had a horse, she looked at me like I had ten heads… after explaining the situation and pointing toward the fence/house, she informed me that it was her mother-in-law’s horse and would call her husband to go get him.

As Ben and I walked back to the car, we saw a garage door open and the horse’s owner stepped out.

“Can I help you?” she asked. Looking back, we probably looked pretty strange, walking around her yard before 7 am.

I then explained the whole thing.

“Oh…. how did he get out? ” she asked… then, after a few more questions, “Thank you for letting me know. Thank you.”

I then realized that it was late and I was going to have to rush to get to work on time so we said goodbye and good luck and headed home.

I made it work in the nick of time.

So, in short, I didn’t get my run in…but I did my good deed for the day. I’d like to think I was supposed to wake up late and miss my window for the slightly longer run…just so I’d be in the right place at the right time…

Regardless, I know that I won’t be questioning those weird feelings telling me to get out the door and run…I’m gonna go! 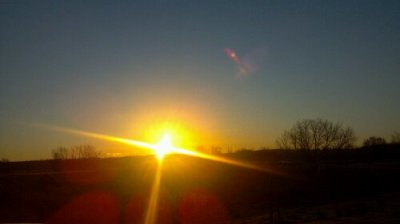 To think, I also would have missed this gorgeous sunrise if I hadn’t gotten up! 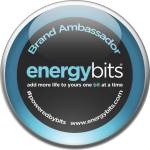